Well like you, we are tired of hearing about the Coronavirus, but let me give you a perspective of RVing during a pandemic.

Social distancing – Mike and I are ambiverts (a person whose personality has a balance of extrovert and introvert features), leaning a little more to introvert, so social distancing is in our nature.  We prefer small groups and keep our distance.

Minimalist Living – Living in a small place you can’t hoard toilet paper, no room.  When we go shopping we buy what we need for two weeks.  You have to keep your small home organized and clean, since space is limited and everything has its place or it will look and feel cluttered.  Plus I have OCD (thank you Mom and Grandma), so this is easy for me to keep the house clean and organized.

Stay at home order– As various places are closed, we are not able to site see and explore new areas of the country as we like.  We only travel to our next campground (if it is open) and stay put.  We only go to the grocery store or to get fuel.  We do walk around the campground and nature trails to get some fresh air and exercise.  It is nice to have our own bathroom, shower, washer and drier, to be truly self-contained.

Campground closing – This is the one that hasn’t affected us yet, but does cause us to have various backup plans.

Stay healthy and travel safe.  Remember to wash your hands, keep your distance, and stay home if you can.

God bless and keep you.

Mike and I took my parents for a ride through Charleston, South Carolina during their stop home for a quick visit to Buffalo for my Uncle’s memorial.  Our first stops were King Street and Meeting Street to admire the steeples of the various churches, now I understand why it is called the “Holy City.”  Plus there are plenty of shops and restaurants to choose from.  We then drove to “The Battery” and Rainbow Row to see the beautiful historic homes and architecture.  We tried to see the famous pineapple fountain at the Waterfront Park but parking was impossible, so we decided to do at our next visit. 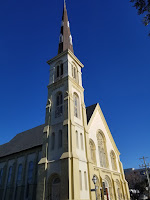 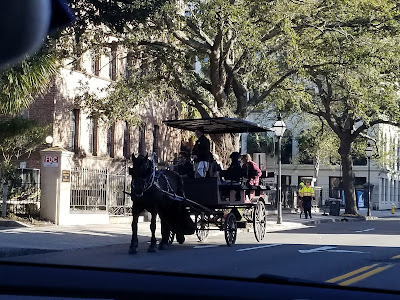 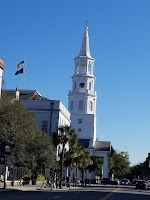 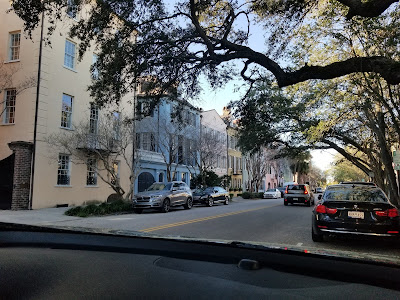 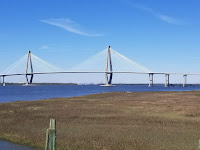 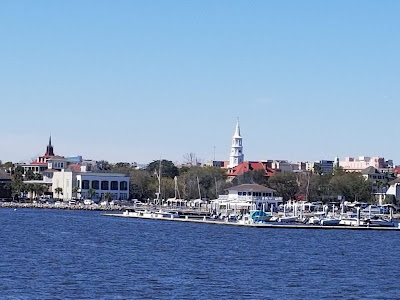 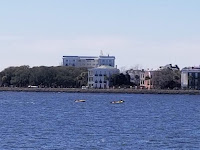 A few days later, Mike and I went on a boat ride to visit Fort Sumter.  We parked our car at the Patriot Point parking lot for five dollars.  The Spiritline ferry cost us $24 each.  The boat ride takes about 30 minutes to get to the fort; we then had about an hour to tour the island fort, with a 30 minute boat ride back.  We decided not to tour the USS Yorktown Aircraft Carrier and USS Laffey Destroyer at Patriot Point, as we didn’t have time and it was an additional $24 each, another stop to add to our next visit. 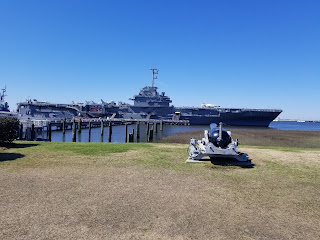 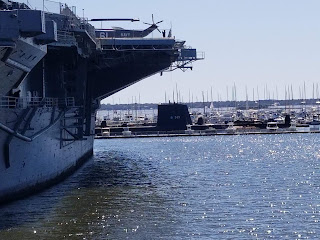 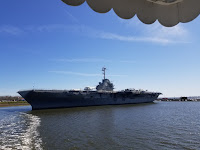 The first shot of the Civil War was at Fort Sumter.  Fort Sumter is a man-made island (made by slaves) to help protect the harbor of Charleston after the War of 1812.  The fort sustained substantial damage to the buildings during the Civil War.  By the Spanish American war the fort was modified with a new battery, black building in the center of the fort, armed with two disappearing cannons. These are very large cannons that are raised up to fire, but the recoil causes them to fall back and below a wall so the enemy can’t see them as they approach. Very scary for the enemy as they don’t know they are there until it’s too late. 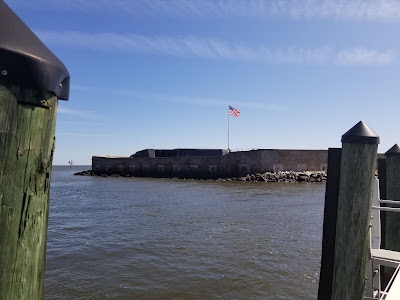 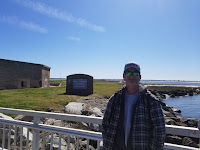 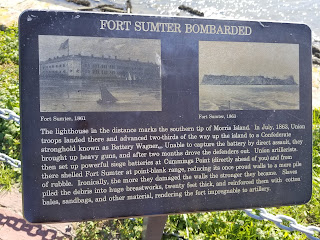 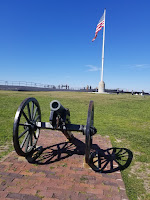 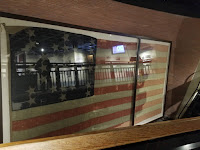 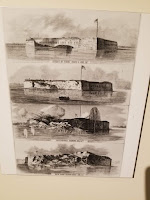 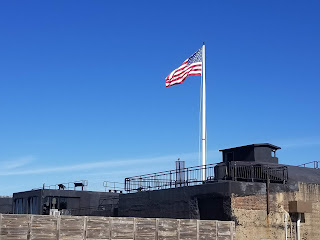 What did you do and like while visiting Charleston?  To help us plan our next visit.

We took a ride to Hilton Head.  Stopped at a couple beaches, but the temperature was in the low 40 with a wind chill, so we didn’t stay long, it was cold.

Hilton Head is a resort community for you and your family to enjoy; with plenty of beaches, golfing, biking, fishing, shopping and restaurants; a summer destination. 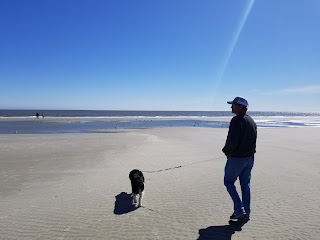 
We took a visit to the Parris Island Marine Corp Base to visit the Parris Island Museum.  It’s my favorite word… FREE.  This is the base my brother, Scott, graduated basic training from, so it has special meaning for our family.

The museum is about the island and the marines.

Mike and I got to check a box of my bucket list… Savannah, Georgia.
What a beautiful city! 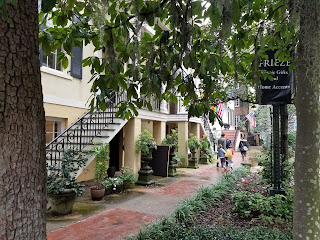 We took the Old Town Trolley Tour of the city.  It cost over $70 for the both of us.  The complete ride took a total of 90 minutes with the driver giving insight to the history and points of interest sites along the way.  There are 15 stops and they have a hop on and off policy.

Mike and I decided to take the whole ride to determine where we wanted to stop and sight-see.  Our first stop was Chippewa Square. This is the park that Forrest Gump sat on a park bench.  The bench is in a museum.  They also filmed the church steeple that the feather falls from that, lands at Forrest feet. 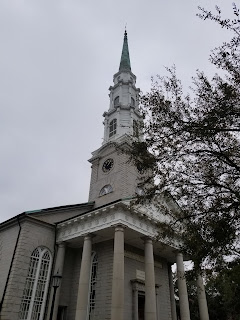 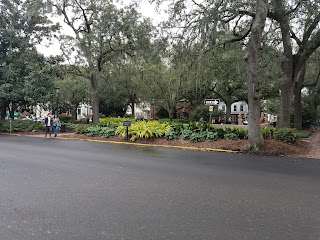 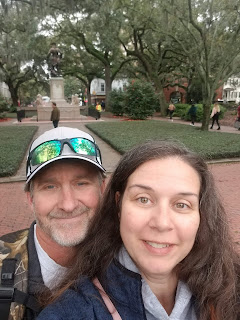 We walked to Mercer-Williams House at Monterey Square this is the house that was in the movie Midnight in the Garden of Good and Evil. 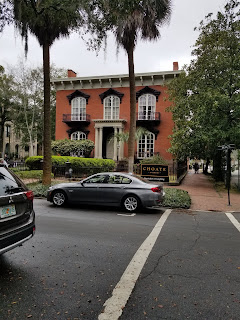 From there we walked to Forsyth Park. 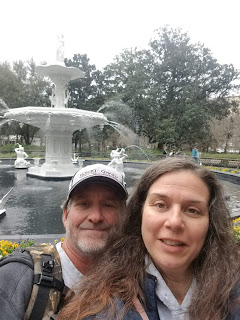 We waked to the Cathedral of St. John to catch the trolley. 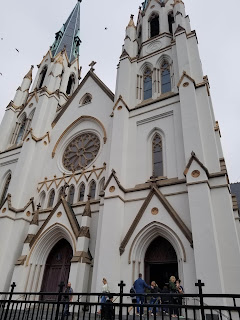 Our next stop was East River Street where we shared some delicious banana pudding and chocolate ice cream cone.  It cost us over $9.  East River has plenty of shops and restaurants to enjoy along the river. 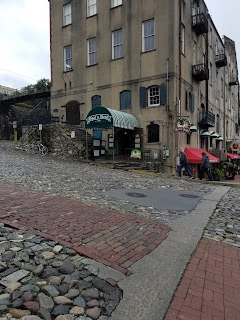 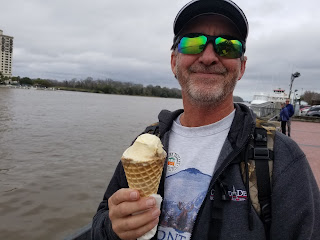 We got back on the trolley at Cotton Exchange / Exchange Bell on West Bay Street.  Then back to our truck at the first stop.

There is still so much to see, that we will have to return.  Until we come to visit again.  Thank you Savannah. 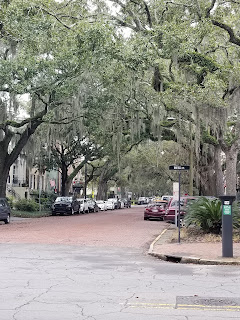 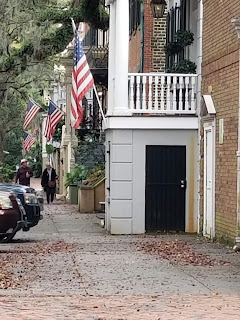